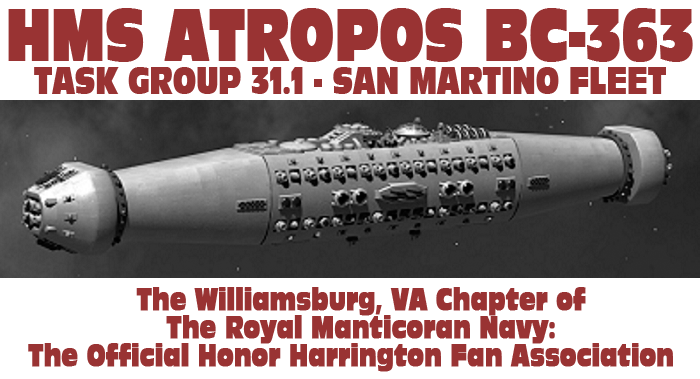 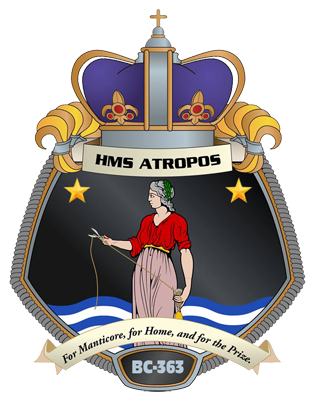 HMS Atropos BC-363 has set sail to scour the grav waves of all MANTICORE'S enemies. As a Homer-class battlecruiser, Atropos and her sister ships were designed and launched in the latter half of the 19th century PD to serve as energy weapon heavy close range brawlers, well equipped with Grasers, Lasers, Energy Torpedos and even a Grav Lance in each broadside. Although initial upgrades to this classes were deferred to conserve resources for the Reliant program, Homers have taken to upgrades well, operating the latest in Fire Control and Compensator systems as many units of this class were taken out of mothballs following allied losses during OPERATION THUNDERBOLT. Even now, the latest flights of this class remain well suited to protecting the Empire's interests in regions such as SILESIA and the TALBOTT QUADRANT.

In reality, HMS Atropos is a chapter of the Royal Manticoran Navy stationed in WILLIAMSBURG, VA under the guidance of Captain Junior Grade Brian Burnham. The founders of HMS Atropos thought it would be enjoyable to launch a new chapter in Virginia's Historic Triangle, making it easy for the members to explore the history of the Age of Sail that inspired the novels of C.S. Forester and Patrick O'Brian which eventually gave rise in turn to David Weber's HONORVERSE. It is hoped the crew will take common enjoyment from such fictional series as Horatio Hornblower (C.S. Forester), Aubrey/Maturin (Patrick O'Brian), Honor Harrington (David Weber), Theogony (Chris Kennedy), Lieutenant Leary (David Drake), and many others yet to be discovered. Atropos herself takes her name from C.S. Forester's novel HORNBLOWER AND THE ATROPOS, and was Horatio Hornblower's first sea-going command after being posted Captain. In addition, the crew can organize group forays to view reconstructed and preserved sailing and historic naval vessels at locations such as Jamestown Settlement, The Mariner's Museum, Nauticus, and even USS Constitution if the crew feels like a road trip. Atropos' crew can also combine TRMN's grand tradition of ROLLING PODS with HORNBLOWER and MASTER AND COMMANDER Watch Parties or tournaments of WHIST and SPADES, depending on which books they're choosing to dive into at a given time.

Membership in TRMN and aboard HMS Atropos is completely FREE, and we welcome MEMBERS OF ALL AGES and levels of activity. All members of TRMN will have access to entertaining correspondence courses (including real world miltary history, fictional Honorverse history, and leadership theory and tactics), costume and prop building resources, and contact with like-minded science-fiction fans throughout the world. For those interested in taking a leadership role aboard Atropos or in the TRMN at large, be aware that our fan organization continues to grow and offers many OPPORTUNITIES FOR ADVANCEMENT for dedicated members: from serving as a Saganami Island Instructor to serving on the staff of a Fleet Commander or Space Lord, there are many ways you can help make TRMN a continuing success. Any prospective members with questions about Atropos or TRMN in general, are invited to contact Captain Burnham, and all are welcome to join the Atropos Facebook Group.

If you're interested in taking an active role in a new chapter of one of the fastest growing fan associations in science-fiction fandom today, proceed to TRMN'S Website, and join now! Upon filling in your contact information, you'll be able to join HMS ATROPOS directly on the signup form. Atropos will need a crew of Helmsmen, Damage Control Mates, Gunners, Coxswains, Marines, and Spacers of all ratings to round out her complement. Aboard HMS Atropos, there is a billet for EVERYONE. It's up to YOU to decide how to answer the Call to Duty! 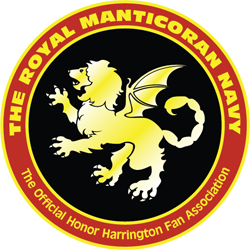